You can compare one person or thing with another by saying they are equal or different.

Comparing people / things that are equal

Comparing people / things that are different

Some adjectives have irregular forms.

I love Summer. I know it is warmer and hotter than any other season but it is more glorious. The sky is as clear as in Spring and there are more hours of sunshine. We, students, have more time to enjoy the day and we are less busy than during term time. Days become longer and better so we can play all day long. Nowadays climate is more changeable than some years ago and sometimes we have to pay attention to the weather forecasts to know if one day will be sunnier than the previous one or not. But you can also foresee the weather from your own house. Just look at the weathercock at the top of your village church and you will know the direction of the wind. If you want to know the temperature just look at a thermometer, and if you are interested in the air pressure, look at a barometer. Gathering all this information you will know if tomorrow will be finer, rainier or windier than today. Anyway, although sometimes the weather in Summer is worse than in Winter, I continue loving it because I don’t have to go to school.

We use a superlative adjective when we compare one member of a group with the whole group (including that member). We can say that it has more or less of a quality than any other of its kind

Some adjectives have irregular superlative forms. 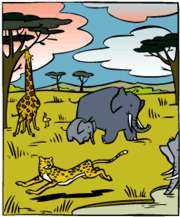 Yesterday our science teacher showed us some pictures about the wonders of nature. I was so impressed by them that I asked her to lend them to me, so that I could see them at home again. Here they are. In the first picture you can see there is the man’s best friend and cat’s worst enemy, the dog. In this same photograph you can also see two mountains, but they aren’t as high as the Everest, the highest mountain in the world. And the small river on the left isn’t the Nile, of course. In the second picture there are some elephants.

The elephants are said to have the best memory. African elephants are the smallest ones because Indian elephants are bigger than African ones. In this photograph you can also see the tallest animal, the giraffe, and the fastest one, the cheetah.

The biggest mammal in the world appears in the third picture. It is the blue whale. The longest ones are up to 34 metres and they weigh up to 135 tons. But we have to take care of them because they are an endangered species. In the same picture you can see the worst shark, the Great White. It’s the most dangerous shark in the world and maybe the deadliest assassin of the animal kingdom. The biggest white sharks are up to seven metres long and weigh up to 18 tons. Isn’t it amazing? I hope you have enjoyed yourself as much as I enjoyed my science class yesterday.